Sprayed on, Sprayed off…Where are we ? 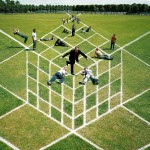 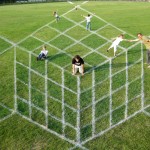 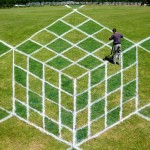 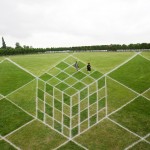 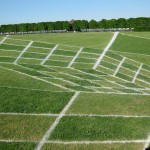 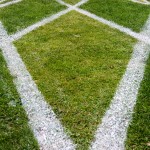 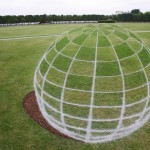 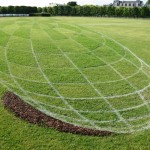 ‘The morphing of gardens through Anamorphosis’ – Established in the National Domain of St Germain en Laye (France) under the sponsorship of Yann Arthus Bertrand.

As a tribute to André Le Nôtre, a giant cube and a globe criss-cross their lines on the lawn to transform the park of the Château de Saint Germain en Laye into a giant 3D field.

In the middle of this crisscrossed area, a cube seems to erupt from the ground, even though the grass is flat. To the left of the area, a circular object resembling a globe appears to rest lightly on the grass. Both images were created with the same primary material, the grass of the park, dark green in some areas and light green in others due to the variations of chlorophyl! In the end, this is a very simple example of anamorphosis that only reveals itself from one observation point, one spot on the giant drawing where it all comes together.

André Le Nôtre, a master of perspective and the one who designed the terrace of the Parc de Saint Germain-en-Laye, would surely have appreciated it!