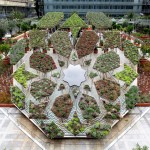 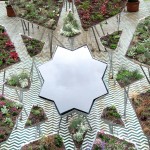 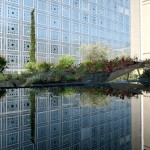 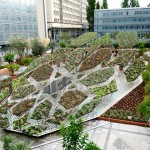 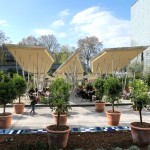 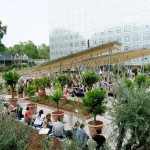 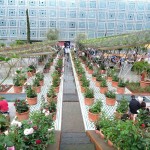 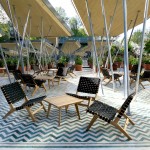 At the Arab World Institute, in conjunction with the « Jardins d’Orient » exhibit (Spring-Summer 2016)

Reinventing the perfect shape and changing our view on the world

Can we generate a story capable of escaping literal references while being authentically connected to the history of the Oriental garden ? By creating an immense anamorphosis on the main AWI plaza for the « Jardins d’Orient» exhibit, I believe I have brought about a modest answer to this question.

A link between history and modernity

Offering a destructured concept that reshapes itselfs from a unique point of view, the anamorphosis holds a strong bond with the spatial representation of the Oriental world. With its suspended elements around a small body of water, symbol of eternal life, with its part of mystery (or mirage) surrounding the discovery of its image, with its initiative path (or ramp), the anamorphosis participates in creating this link with history and modernity. It does not only reveal another landscape, another path composed of lightness, questioning, awe, but also another part of ourselves.

An obvious proximity with Oriental Art

The choice of the Poygone Étoilé for a reconstructed image was evident. Islamic visual art is only the external expression of a contemplative art. It is also an active art, that aims to transform man’s environment, that allows him to come into contact with the invisible.  In this sense, let us imagine an empty space, with walls covered with visibles ornaments and criscrossing in an infinite pattern, allowing us to contemplate what has no shape , no contours, the untangible. Abstract art is not devoid of a symbolical dimension. Amongst the most widely recognized motifs, we find the star polygon with eight branches ; it is essentially a synthesis of the circle (Symbol of the divine and of perfection) and the square (symbol of the Earth and of Creation). The geometrical combination forms figures that the eye cannot grasp because the lines all seem to depart towards infinity from multiple centers. We  encounter this idea of ubiquity of the center again. It is Unity at the heart of multiplicity.

In order to complete this project, everything had to be invented from scratch : the shape of the puzzle pieces (they number 32, the heaviest weighing nine tons) ; the method to uphold the structures (350 metallical supports, all of them one of a kind) allowed to bring the motif out of the ground ; the large variety of plants selected (6 000 perennial plants of at least 120 different species were continuously growing atop the structures) ; the security perimeters, the complicated lighting, the debacle for watering, the signage and explanations…

The anamorphosis and the Oriental Gardens had never had common ground. But their proximity appears so strong that one cna only say it would be a matter of time. Obviously misleading ? It’s up to you to decide… 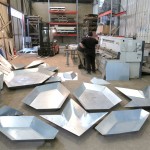 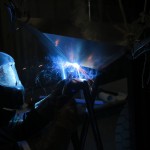 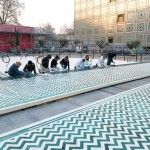 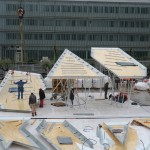 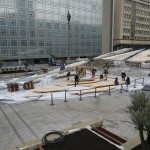 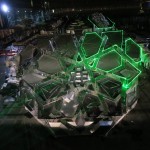 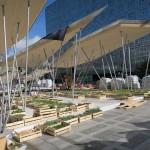